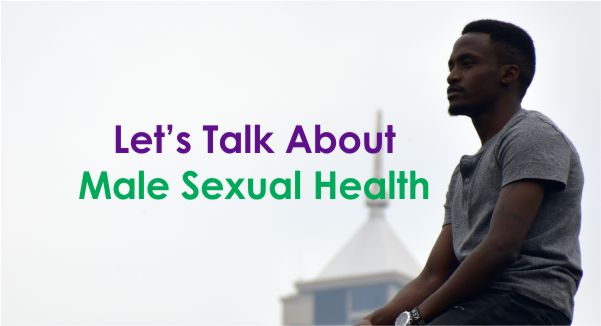 It’s weird how we rarely talk about issues regarding male sexual health when men account for a whopping 40 – 50% of infertility cases. We think more men should take their bodies more seriously so below are 5 common male sexual health issues.

We understand the difficulty for men though. Discussing sexual health issues might be an uphill task because any indication of a challenge in this regard is usually considered to be an indictment of his masculinity.

However, this shouldn’t be the case. Sexual health issues can be a sore spot for men in relationships whose situations will largely impact their partners.

15% of couples contend with fertility issues and while women are commonly seen as the root cause, especially in countries like Nigeria, research suggests that men are culpable too.

This is why we think it is important for men to take their sexual health seriously and consult medical professionals if need be.

Commonly referred to as impotence, this is when a man can no longer achieve or maintain an erection for intercourse. It could also be when a man experiences a marked decrease in sexual desire.

Erectile Dysfunction is often caused by an existing physical problem because for a person’s to become sexually aroused, his brain, hormones, nerves, muscles, and blood vessels all need to be functional – in tandem and individually.

Possible causes of impotence include heart disease, diabetes, obesity, high cholesterol and blood pressure, low testosterone, excessive use of alcohol, etc. Erectile dysfunction might not be a problem if it’s one-off but if it becomes an ongoing issue, it can affect a man’s self-confidence and negatively impact his relationship.

Semen is the fluid containing the sperm a man ejaculates during intercourse. It is not the same as sperm, which can be likened to the passenger while the semen is the bus.

If a man ejaculates semen that contains less sperm than normal, he is considered to have a low sperm count. This condition is also referred to as oligospermia, whereas if an individual has zero sperm, it is known as azoospermia. This condition can be caused by a variety of factors, many of which are avoidable: smoking, excessive alcohol consumption, obesity, direct heat to the groin, and excessive intercourse (yes, this is a ‘thing’).

Peyronie’s disease is a condition that occurs when fibrous scar tissue forms inside the penis. This scar tissue then causes a man’s erection to curve, which can result in significant pain and discomfort.

Peyronie’s disease can be caused by an injury to the penis such that blood cells become trapped at the injury site, leading a build-up of scar tissue while the body tries to heal naturally. Not all cases of Peyronie’s disease happen as a result of injury as it can occur gradually for some men as they age. However, there are both medical and surgical options available to treat the disease

Also known as prostate enlargement, this is a natural aspect of ageing in men but can have adverse effects later on. The prostate surrounds part of the urethra, the tube that carries urine and semen out of the penis.

When a man has BPH, the prostate is larger than usual so it squeezes the urethra. This can cause a weak stream when men pee and cause them to wake up a lot at night to go to the bathroom. However, BPH isn’t prostate cancer and doesn’t make one more likely to get it.

BPH is a common condition, especially in older men but there are a lot of treatments for it, from lifestyle changes to surgery. We’ll stop here but not before emphasising that It’s important that men know and understand their bodies because there is a lot more to it than the obvious external reproductive organs. There is no shame in wanting to take an active interest in what goes on ‘under the hood’.

Don’t hesitate to ask your healthcare provider should you have any questions or concerns. You only have one body – look after it and it will look after you.